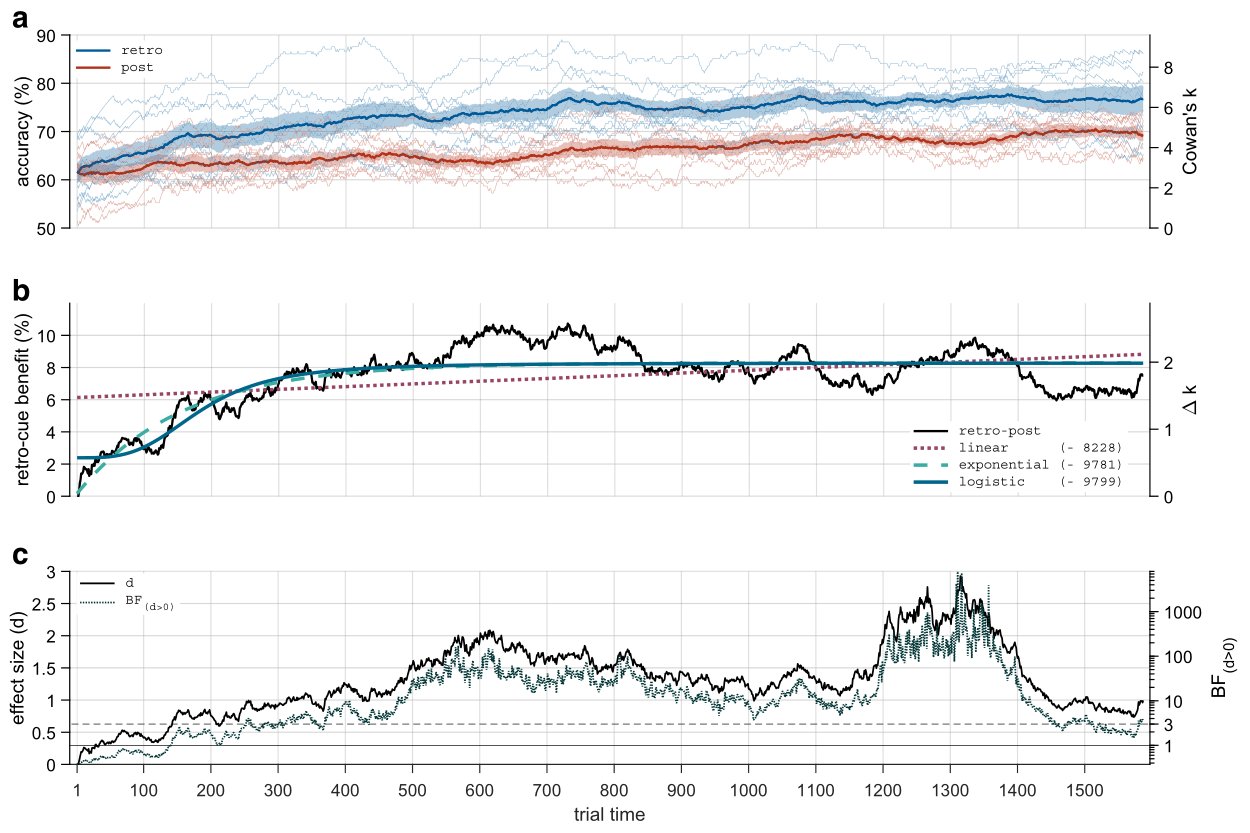 Retro-cues indicate to-be-tested items in a memory paradigm after the memory stimulus and before the memory probe (very similar to Sperling's partial-report paradigm). That this increases performance and associated measures of memory capacity is well understood.

What produces this effect? Two possibilities:

H1) Retro-cues access a high-capacity, unattended memory system, such as sensory memory or long-term memory, and bring them into reportable working memory.

H1 predicts that observer's performance is only constrained by how well they can use the retro-cue. With excessive training, performance should continue to improve and reach ceiling levels, if high-capacity  sensory memory or LTM is accessed. Fragile Memory has previously been proposed as a form of sensory memory, related to iconic memory, with a capacity of 16+ items. If it can explain the retro-cue effect, then in our paradigm with a set size of 12 items, observers should do fairly well after 12(!) hours of practice.

This is not what we found. Performance relative to a no-retro-cue condition clearly reached a plateau at about 6 items, which is higher than traditional WM capacity, but well below what would be expected if high-capacity sensory memory was accessed. Our findings support the view that retro-cues induce a shift of memory resources (e.g. attention) among items in WM in accordance with task demands.  We made some additional observations:

It takes several hundred trials before retro-cue benefits stabilize. This makes it crucial to employ an hour or two of training before collecting experimental data in retro-cue paradigms.

Performance in both conditions continued to increase, even after 12 hours. Are change-detection paradigms suitable to assess WM capacity if performance is a function of familiarity with the task? Can measures such as Cowan's k be compared across studies? Perhaps not.

Our findings also imply that WM paradigms that do not employ retro-cues, underestimate memory capacity by several items. That is, if item-based accounts of capacity are to be believed at all, which the present study is agnostic towards.

Finally, to demonstrate the effect of changing the window size of the moving average computation, here is an animated figure: https://osf.io/wqz8g .
Data and code is available at: http://osf.io/9xr82 .